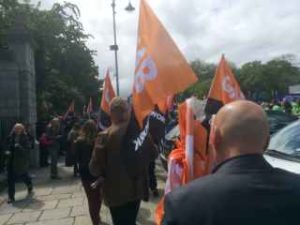 GMB march with the workers of Dunnes Stores in Dublin

Conservative claws have at last been revealed in the publication of the Trade Union Bill. There are no surprises in the attacks on unions and the Labour Party’s finances.

The Bill will introduce a 50% threshold for ballot turn-out; and an additional threshold of 40% of support to take industrial action from all members eligible to vote in the key health, education, fire, transport, border security and nuclear decommissioning sectors — including the Border Force. It will also repeal a ban on the use of agency workers to strike-break.

The other nuts and bolts of the Bill are as follows:

• a four-month time limit on the mandate for industrial action;

• a further attack on facility time in the public sector; and

• union members will have to opt in to a union’s political fund.

TUC general secretary Frances O’Grady said: “This Bill is an unnecessary attack on workers’ rights and civil liberties that will shift the balance of power in the workplace.

“Getting a pay rise or defending terms and conditions will become far harder for working people. Even when ballots meet the government’s new thresholds, employers will soon be able to break strikes by bringing in agency workers.”

“This is the second time that the Tories have aimed to bankrupt the Labour Party. They did it before in 1928. The same old Tory class warriors want to do it again nearly 90 years later.”

Consultations on the proposed introduction of a 40% threshold for important public sectors; new rules and code of practice on picketing; and the use of agency workers have started and will be open until 9 September 2015.